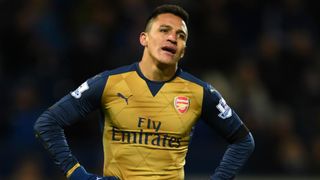 The Chile international has been sidelined since picking up a hamstring problem in the draw with Norwich City in late November, but the Premier League leaders hoped to have him available for the start of their FA Cup defence.

"The bad news of the week is that Alexis is not quite ready," Wenger told the club's official website. "It is a precaution because of his hamstring, and it takes a few more days. He's not bad but he's not ready.

"The team news is that, from last week, we have no big injuries, and the squad will be similar to the squad who played the last game against Newcastle. Will a young player or two start? I haven't decided yet."

Wenger confirmed that Santi Cazorla and Francis Coquelin remain out of contention with knee injuries but there is more encouraging news concerning Mikel Arteta and Tomas Rosicky.

"Nothing's changed [from the original timescale] with Santi," he said. "It could be a bit shorter with him because he's often quicker [to recover] than you expect him to be. Cazorla and Coquelin are doing well.

"Tomas Rosicky is not far, he's back in full training next week, so should be available soon. Mikel is available."

Despite Arsenal facing a gruelling run of Premier League fixtures this month, with trips to Liverpool and Stoke City followed by a home clash with Chelsea, Wenger says he is unlikely to consider resting many key players for Sunderland.

"The thinking is to give absolutely everything to qualify," he added. "We are the holders of the cup and I know as well by experience that it is very important that you get in the competition and that you have a successful third round. It's a tricky one, always, the third round."