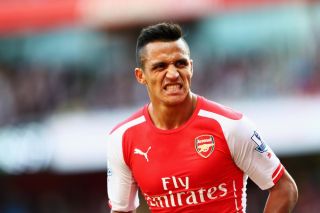 Alexis completed a £35 million move to the Emirates Stadium from Barcelona in July and has started all three of their competitive games so far this season.

However, the Chile star has failed to find the net yet and was hooked at half-time on Saturday with Arsenal 2-0 down to Everton after disappointing in a central role.

Alexis' replacement Olivier Giroud came on to give Arsenal more of a presence in attack and the France international headed home in the last minute of normal time to rescue a 2-2 draw.

Having signed Alexis after a season in which he scored 21 times in 54 games for Barcelona, Wenger is not worried by his sluggish start, putting it down to a lack of fitness after a punishing close-season schedule.

When quizzed on Alexis' form, Wenger explained: "At the moment he is not completely ready physically, but I do not worry for him.

"It's always difficult to know why the confidence is not at the best, I believe it is mainly physical."

Wenger also explained Giroud's omission from the starting XI, having rested last season's top scorer to avoid him burning out.

He added: "I have more strikers than before so sometimes I can give him a little rest. Giroud has just played one game since the World Cup so I gave him a little breather.

"But I knew we would be dominating the game in the second half and we would need some physical presence, we looked more dangerous because we were not in a counter-attacking situation, we were in a dominating situation and his presence was very important."