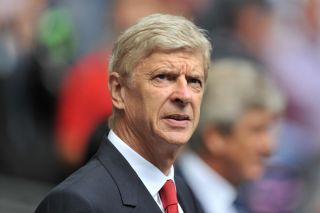 Wenger's men were dealt a 3-0 loss on their last trip to Goodison Park in April but bounced back to finish fourth and secure their UEFA Champions League play-off spot.

The French tactician said Arsenal were "bullied" by Roberto Martinez's men and that their re-match at the Merseyside venue gave the Londoners the chance to atone.

"We were a bit bullied. We had an off day," Wenger said, of Arsenal's most recent league defeat.

"Many teams think that [they can bully us]. But we get that question many times.

"If you look at the results from the last three or four years away from home, we are the team with the best away results."

He added: "We have young players, that means that every year they can be better and the team improves as well with success, which we had a reasonable [amount of] last year and we were consistent overall in the season.

"We have a good opportunity to show on Saturday that we have moved forward and that we are stronger than last year."

Wenger said the most troubling aspect of their loss to Everton, in which Steven Naismith and Romelu Lukaku scored in addition to former Evertonian Mikel Arteta's own goal, was their mental fragility.

"Everton was a low point last season, yes. In the quality of our performance, and even more than that in mental resistance, the mental steel on the day," Wenger continued.

Wenger conceded Everton were unlucky to miss out on a Champions League spot and rued Arsenal having to settle for a European play-off place despite winning 24 games.

"It was very tight last year," he said.

"You can look at the tables - that never existed before.

"Even if the Premier League was more interesting than ever last season, the top four teams took more points together than in any other year.

"For Everton, it's the first time a team on 72 points don't get in the top four. It was very difficult last season."