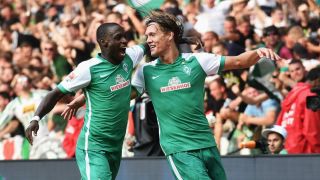 Werder Bremen picked up their first win of the 2015-16 Bundesliga campaign as Jannik Vestergaard secured a 2-1 victory which ensured Borussia Monchengladbach are yet to secure a point.

Vestergaard headed home Zlatko Junuzovic's corner eight minutes into the second half to secure all three points after Lars Stindl had cancelled out Aron Johannsson's opener.

Bremen – who also missed a late penalty after Granit Xhaka was sent off three minutes from time – were grateful to goalkeeper Felix Wiedwald early on as he saved from Raffael and Xhaka, before Johannsson broke the deadlock.

Marvin Schulz hauled down Anthony Ujah inside the penalty area, and the American forward made no mistake from 12 yards to score his first for the club.

The hosts were not ahead for long, though, as Gladbach rallied before half-time and equalised through Stindl – the midfielder converting Thorgen Hazard's pass.

Bremen started the second half well and were back in front after 53 minutes when Vestergaard struck, and were then reliant on Wiedwald again as he denied Josip Drmic.

There was more misery for the visitors - who have now lost all three of their opening fixtures – in the closing stages as Xhaka conceded a second penalty and was shown a second yellow card, but Felix Kroos failed to extend Bremen's winning margin as he dragged his spot-kick wide.