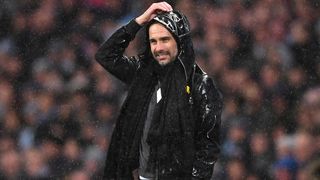 Pep Guardiola claimed the hectic fixture pile-up in English football will "kill the players" after Kyle Walker picked up a problem in Manchester City's win over Watford.

The England full-back looked to have hurt his groin just before the final whistle at the end of his side's comfortable 3-1 victory at the Etihad Stadium on Tuesday.

City saw Gabriel Jesus suffer a knee injury in the draw at Crystal Palace two days earlier that is likely to keep him out for at least a month, while Kevin De Bruyne – who started the win against Watford – had also been hurt at Selhurst Park.

Guardiola expressed his concerns before the match about the scheduling in the Premier League and domestic cups at this stage of the season and he again hit out at tournament organisers after watching his side move 15 points clear at the top of the table.

"We played really well. After dropping two points, we spoke about our reaction because big teams drop points but not too much," he told BBC Sport.

"We made five changes from the last game but it's not our fault. I know here in England the show must go on, but that's not normal, guys. The big bosses should reflect that.

"Watford scored because they have good players. We will review the action but people cannot expect us to win 7-0 every time."

Guardiola admitted De Bruyne played through the pain because he was desperate to be involved in City's latest step towards the title.

"Kevin has an inflammation and we said 'maybe you stay back and don't play' but he said he wanted to play," Guardiola added.

"He had a bit of pain but he wanted to play. It showed me a lot. He wants to win the Premier League. We want to follow him in this behaviour."

City host Burnley in the FA Cup on Saturday before they face Bristol City in the first leg of their EFL Cup semi-final next Tuesday.