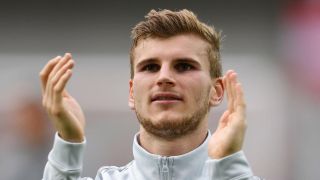 RB Leipzig star Timo Werner is in contention to play against Borussia Dortmund on Saturday after recovering from a cervical spine blockage, according to coach Ralph Hasenhuttl.

The young striker asked to be withdrawn 32 minutes into Leipzig's Champions League defeat to Besiktas on September 26 after appearing to struggle with the noise of the crowd.

Hasenhuttl then revealed after the match that Werner was suffering from "breathing and circulation" problems, which were ultimately put down to the cervical spine blockage.

Werner missed Germany's recent internationals as a result, but Leipzig have been handed a major boost ahead of what will likely be one of their toughest fixtures of the season.

Hasenhuttl confirmed in his pre-match media conference: "Timo Werner was training yesterday, even heading balls, and the cervical vertebra wasn't a problem.

"We have to see that he is physically top-notch – I can assure you that he will be in the squad."

It was also confirmed on Friday that Leipzig have tied captain Willi Orban down to a new contract, with the German signing a three-year extension to keep him at the club until 2022.

"I'm very happy that we've been able to agree on a new contract already," Orban told the club's official website.

"The move from Kaiserslautern to Leipzig in 2015 was a great one for me. [Sporting director] Ralf Rangnick outlined my prospects back then, convincing me of something which has now become reality.

"I've had two incredibly good years with the Red Bulls and I am now looking forward to many more exciting seasons. We've already achieved a lot, but there's lots more to come yet and I'm really proud to remain part of this team and this club."