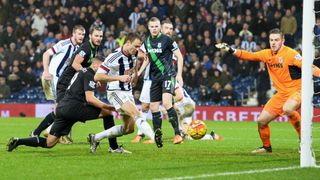 Jonny Evans struck in injury time to earn West Brom and manager Tony Pulis a 2-1 win over the Welshman's old team Stoke City in the Premier League on Saturday.

Mark Hughes' Potters, having struggled to respond to Stephane Sessegnon's 60th-minute opener, thought they had earned a point when Jonathan Walters powered home the equaliser with nine minutes to go at The Hawthorns.

Stoke then lost Geoff Cameron to a harsh red card two minutes after restoring parity, prompting a West Brom onslaught that produced a dramatic winner, Evans stabbing home his first goal for the club from close range after the visitors failed to clear a corner.

The result sees Pulis' men climb to within three points of 10th-placed Stoke and they are now nine clear of the relegation zone.

West Brom started strongly, but the first real chance fell to the visitors eight minutes in, Boaz Myhill reacting quickly to tip over a Glen Johnson cross-cum-shot. From the subsequent corner, Cameron struck a strong half-volley at goal that was blocked by the legs of Craig Dawson.

Evans was inches away from opening the scoring for the hosts in the 16th minute, narrowly failing to connect properly with the ball at the back post after Dawson flicked on Chris Brunt's corner.

Marko Arnautovic perhaps could have done better when, approaching the half-hour mark, he was released in behind the West Brom defence by Xherdan Shaqiri's clever lofted throughball. The Austrian's shot across the face of goal was well saved by Myhill.

West Brom should have taken the lead with three minutes remaining in the half, Darren Fletcher shooting over the crossbar after being found unmarked by Sessegnon in the centre of the penalty area following a corner.

Stoke came close to breaking the deadlock with a well-worked move seven minutes into the second half.

Johnson picked out Arnautovic in the area and the former Werder Bremen man produced a delightful lay-off to tee up Shaqiri, whose effort was weak and off target.

The visitors came to regret passing up that opportunity as West Brom took the lead on the hour mark.

Fletcher did well to win possession on the half-way line and drive forward, passing to James Morrison just outside the area. The midfielder found Sessegnon in space inside the penalty area and the Benin international smashed a fierce strike past Jack Butland and into the back of the net.

Stoke laboured in vain to produce a response and had to wait until the 81st minute to pounce, Joselu dispatching a superb cross from the left flank with the outside of his foot, picking out fellow substitute Walters, who nodded home from close range, giving Myhill no chance.

Cameron received his marching orders shortly afterwards, the United States international dismissed for tossing Claudio Yacob to the ground in an otherwise innocuous tussle, although the defender did perhaps appear to raise his hands to the face of the West Brom man.

The numerical difference cost the away team dearly when, in the final minutes of added time, former Manchester United defender Evans slotted home at the back post to snatch all three points for Pulis against the club he steered into the top flight.