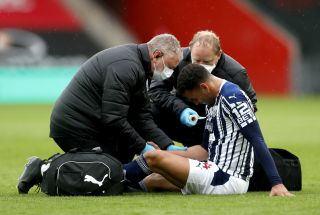 The Wales international was introduced on the hour mark at St Mary’s and picked up the injury during his 30-minute cameo.

Despite the issue, he finished the game but was unable to prevent Slaven Bilic’s team losing 2-0.

An early assessment of the injury saw Robson-Kanu unable to join up with Wales for their triple-header this month and he is now set for a spell on the sidelines while he undergoes rehabilitation.

“An X-ray has since confirmed the break to Robson-Kanu’s right arm and he will undergo surgery to rectify the injury on Wednesday,” a club statement on Tuesday read.

The 31-year-old forward has played five times for West Brom this season in all competitions and scored three goals in the Carabao Cup.