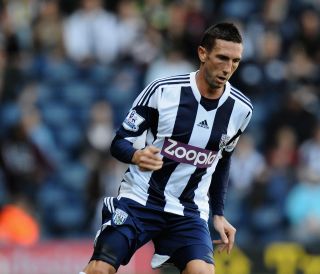 Clarke's men slumped to a 4-1 defeat at Anfield and were already on the wrong side of a Luis Suarez double by the time Amalfitano pulled up shortly before half-time.

The Marseille loanee was unable to make it to half-time for an assessment and made way for James Morrison in the 44th minute.

Morrison pulled a goal back from the penalty spot after Suarez completed his hat-trick but Daniel Sturridge sealed West Brom’s misery with a magnificent 25-yard lob.

"I'm not sure," said Clarke when asked about Amalfitano's condition. "I've not really had a chat with the doctor.

"He was indicating that he had an injury. We tried to get him to half-time but he said it was too bad, so we made the change.

"We'll assess him and see what the problem is."

Amalfitano has scored twice in seven appearances for West Brom this season, his efforts coming in wins over Sunderland and Manchester United.