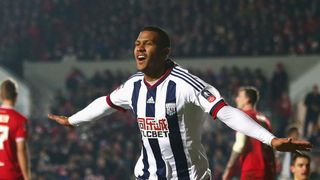 Jonas Olsson is confident Salomon Rondon is the man to help ease West Brom's problems in front of goal, starting with the FA Cup fourth-round tie at home to Peterborough United on Saturday.

Tony Pulis' team have only scored once in their last three matches in all competitions – a Rondon strike to see off Bristol City away in a third-round replay – with the likes of Saido Berahino, Rickie Lambert and Victor Anichebe struggling to find the back of the net.

Berahino's record in the FA Cup of six goals and four assists in his last five matches suggests he should be the man to fire West Brom into the fifth round, however, he continues to be out of favour under Pulis.

The 22-year-old has been the subject of intense transfer speculation this month with Tottenham still reported to be interested in signing the striker after chasing him in the off-season.

Berahino's form has dipped due to the uncertainty over his future, leading Pulis to drop him to the bench and prompting talk of a rift between the pair.

Pulis has rejected those suggestions but whether he will start the England Under-21 forward this weekend remains to be seen.

Rondon's involvement has also been questioned after Pulis said he was struggling from fatigue following last weekend's goalless draw with Aston Villa, but Olsson believes the Venezuela international - who has four goals in 22 appearances in all competitions - is more than ready to lead the line.

"We need to be a bigger threat up front, but we're working on it," Olsson is quoted as saying by the Birmingham Mail.

"He's [Rondon] looked sharp. We did some crossing, some finishing, some small-sided games, and he looked very sharp.

"He is a very strong guy and I think he's been doing really well since he came."

West Brom – who look set to be without Chris Brunt (calf) and James Morrison (hamstring) – are looking to reach the fifth round for a second successive season, but are struggling for form, with only one win in the last five in all competitions.

Peterborough travel to The Hawthorns with similar problems after going three games without a win, the League One side bereft of success since beating Preston North End in the third round.

Graham Westley's side will be without top scorer Conor Washington, who has been sold to QPR, while Adil Nabi is ineligible under the terms of his transfer to the club from West Brom.

Victory for Peterborough would see them reach the fifth round for the first time since 1986, but they have never beaten West Brom in their three previous FA Cup meetings and the Baggies are unbeaten in their last 11 home matches against lower league opposition in the competition.