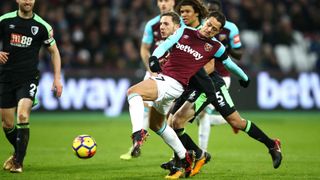 Javier Hernandez may be heading for the exit at London Stadium but he proved his worth to West Ham by salvaging a 1-1 draw against Bournemouth on Saturday.

Things have not gone to plan for Hernandez since a £16million move from Bayer Leverkusen in the off-season, but he scored just 64 seconds after Ryan Fraser put Bournemouth ahead in the 71st minute to earn the Hammers a point.

The Mexican international replaced the injured Manuel Lanzini seven minutes prior to scoring and his first strike since October suggested he still has something to offer David Moyes with Andy Carroll and Andre Ayew still sidelined.

Hernandez's strike meant the roles were reversed from when Callum Wilson's stoppage-time equaliser earned Bournemouth a 3-3 draw against the Hammers when they met on Boxing Day.

After experiencing the ecstasy of coming from behind to beat Arsenal last weekend, Bournemouth's fortunes switched as they were unable to hold their lead in Eddie Howe's 100th top-flight match as manager.

Despite staving off defeat, West Ham failed to clinch back-to-back Premier League wins for the first time since January 21, 2017, while Bournemouth, dumped out of the FA Cup by Wigan Athletic on Wednesday, rise to 12th.

Just 64 seconds between opening the scoring & netting the equaliserJanuary 20, 2018

West Ham wasted no time in taking control of proceedings, Aaron Cresswell and Mark Noble narrowly missing the target with efforts from outside the box in the opening 10 minutes.

Marko Arnautovic had been involved in nine goals in his previous seven Premier League appearances and would have improved those figures had Asmir Begovic not tipped over his attempt to prod a teasing cross from Pablo Zabaleta home.

The Hammers were unable to maintain that momentum and after the half-hour mark Lewis Cook curled just wide from the edge of the area following a lovely short-corner routine.

Bournemouth ended the first half in the ascendancy but were perhaps fortunate not to concede a penalty shortly after the restart when Cheikhou Kouyate's cross hit Nathan Ake's arm, referee Martin Atkinson seemingly deeming the centre-back had no chance of getting out the way.

Begovic again came to the Cherries' rescue before the hour mark when he parried James Collins' glanced header away from the chasing Lanzini, while Arnautovic failed to make the most of a one-on-one opportunity by getting the ball stuck under his feet, granting Steve Cook time to race in for a recovery challenge.

Lanzini went off in the 64th minute to add to West Ham's injury concerns and their problems worsened when Fraser drilled a fine through-ball from former Hammer Junior Stanislas beyond Adrian.

Bournemouth's lead did not last long, though, as a long ball forward from kick-off eventually fell for Hernandez to stab home an unexpected equalier after some shoddy defending from the visitors.

Neither side was able to find a winner in the closing stages, but an injury to Cresswell in stoppage time meant he was replaced by Sam Byram and will provide cause for concern ahead of next weekend's FA Cup fourth-round clash against Wigan.