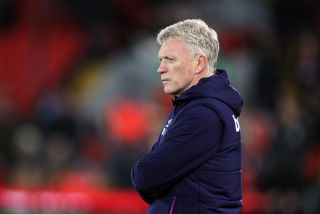 The visit of Saints appears to be a must-win match for the Hammers amid a horror run of fixtures which has seen them lose to  Liverpool twice and suffer defeat at Manchester City.

Nevertheless, West Ham would climb out of the bottom three with victory at the London Stadium on Saturday.

Moyes said: “Every game is the biggest – we’re always required to win. It’s a really big game but they’re all going to be very big.

“We need to show better quality with the ball, when we have the opportunities. The attitude has been spot on. In good spirits. We’re confident and have a good chance of winning.”

Some Hammers fans are planning more protests against the club’s owners, David Sullivan and David Gold, before the match.

But Moyes has once again urged them to get behind the team once the match has kicked off.

“I’m asked this question every week,” he added. “We all need to be together. We need it.

“My message to them is positive, be with the team, stick with them. The team needs you badly.”

Despite their perilous position Moyes is once again likely to resist the temptation to throw in deadline-day signing Jarrod Bowen from the start.

Bowen, the £20million capture from Hull, has looked lively in his two substitute appearances so far.

But former Everton boss Moyes said: “It took players like Leighton Baines, Phil Jagielka six months to get into the team.

“Others, like Tim Cahill, did it quicker. I want Jarrod for the long-term. We need to bring him in as part of the squad and team. But he has really impressed me.”

Midfielder Jack Wilshere remains on the sidelines after a hernia operation but he has begun doing some outdoor training, and Moyes says he hopes the former England international will return before the end of the season.