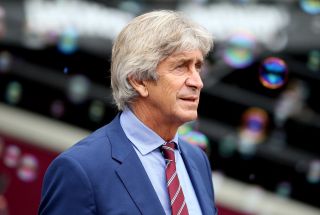 West Ham manager Manuel Pellegrini has challenged his side to recapture their winning mentality of earlier in the season to avoid three straight Premier League defeats.

The Irons slumped to a 2-0 loss at out-of-form Everton last week, having also been beaten at home by Crystal Palace before the international break.

The downturn in form – which also includes a 4-0 Carabao Cup defeat at Oxford – is in stark contrast to earlier in the campaign.

After losing the opening match 5-0 against champions Manchester City, the Irons won three from their next five league fixtures – beating Manchester United along the way.

Pellegrini expects a much-improved display and outcome when Sheffield United head to the London Stadium on Saturday.

“Two games in a row and two defeats – now we must stop it and try to continue to have a winning mentality,” the Chilean coach said.

“We must be focused, go game by game and not think that because we played well at the beginning (of the season) that we will beat our next rival.”

Pellegrini told a press conference: “Maybe beating Crystal Palace here at home, (when) we had the option to do it, we would have been sixth or seventh in the table, but maybe after one game you can be four or five positions back.

“It is tough for every game, so every game you must play as if you are playing against the best team.

“It is why I don’t only talk about West Ham, there are big teams who for whatever reason cannot be consistent.

“You have 20 teams who all have money to get good players. That is why it is so important to play 100 per cent concentrated, because if not, it is very difficult to win the game.”

Pellegrini believes there is still more to come from the £45million French forward, who looked somewhat isolated when leading the attack at Everton.

“I think that he is not doing bad, but I think he can do better also,” the West Ham manager said.

“It is always difficult for different players to come from another league and start here.

“He has started better maybe than we expected, now he must make more movements in the box for the way we play because we need to score more goals.”

Defender Winston Reid is set to step up his recovery from a long-term knee injury with an appearance for the Under-23s next week.

“It’s not easy to be more than a year-and-a half without playing a game, but he’s a strong man,” Pellegrini said.

“He is always working and I hope that this coming week he will play (for the under-23s) without any problems.”