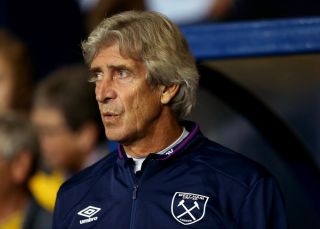 The Hammers have been in fine form in the Premier League so far this season, unbeaten in five matches with three wins including Sunday’s impressive victory over Manchester United.

But Pellegrini made nine changes for Wednesday’s trip to League One Oxford and watched on in horror as they crashed to a humiliating 4-0 defeat.

The result was all the more galling given West Ham had kept four consecutive clean sheets prior to their collapse at the Kassam.

Pellegrini hopes the defeat was simply an “accident” which they can put right on the south coast on Saturday.

“For the moment we are doing well but we had an experience against Oxford where if you reduce your intensity they score goals,” said Pellegrini.

“In football you never know what will happen. It is unfair to take away merits of Oxford who played very well.

“I hope it was an accident and we must return to play 100 per cent. I don’t think you can make a decision on one game.

“But I have seen the players working hard at the training ground and have the level to keep up the same performance in the League.

“We are playing offensive football and will always try to go for the three points.”

Pellegrini, who has made no secret of his ambition to break into the top six this season, added: “It is important to win these games. At this moment we are level with third on points and fifth on goal difference.

“That is a European spot. We are just starting but sometimes you have to try and keep in that position.

“I said on Wednesday when you beat a team it is not just because the other team played badly. Against United we played a very good game.

“We had a good pace, concentration and we did not allow United to do more things during the 90 minutes. If we keep that we can win a lot of games.”

Manuel Lanzini will be back in the West Ham squad after shaking off a foot injury, but Michail Antonio is still out after a hamstring operation.