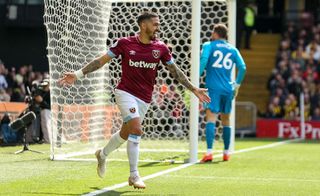 West Ham secured their first top-flight Premier League finish in three years as they beat 10-man Watford 4-1 at Vicarage Road on the final day of the season.

Hammers skipper Mark Noble started and ended the scoring with a fine individual effort and a late penalty, with Manuel Lanzini and Marko Arnautovic also in on the act.

Gerard Deulofeu had pulled one back for the hosts 11 seconds into the second-half, only for Jose Holebas to be sent off soon after on a forgettable final day of the league season for Watford.

The result means the Hornets head into the FA Cup final against Premier League champions Manchester City having won just once in the league since their semi-final success on April 7 – and that was away at rock bottom Huddersfield.

Watford boss Javi Gracia resisted the temptation to rest his key men ahead of Saturday’s showpiece but they were off the pace as West Ham deservedly took the three points which sees them leapfrog their hosts to finish 10th.

Deulofeu tucked away a chance inside the opening 30 seconds but was correctly flagged for offside beforehand.

Moments later and the Spain international collected possession following a favourable deflection but this time his tame shot was kept out by Lukasz Fabianski.

Michail Antonio threatened at the other end as his pace got him in behind Christian Kabasele only to have the ball smothered at his feet by Ben Foster.

In an end-to-end start, a good team move from the hots led to Abdoulaye Doucoure’s shot being blocked behind for a corner, with Will Hughes unable to convert two half-chances that came from the resulting set-piece.

But it was the Hammers who would take the lead, captain Noble skipping past two challenges before side-footing beyond Foster to open the scoring.

Ryan Fredericks was forced off just before the half-hour mark as Pablo Zabaleta took his place at right-back and the experienced defender was almost caught out immediately.

It made little difference to West Ham going forward and they doubled their advantage before the break as Lanzini headed in from almost on the line after following up Antonio’s effort which cannoned back off the crossbar.

Fabianski then made a stunning point-blank save to prevent Troy Deeney halving the deficit on the stroke of half-time.

But there was nothing the West Ham goalkeeper could do just 11 seconds after the restart, however, as Zabaleta’s under-hit backpass was collected by Deulofeu who nipped in to finish past the onrushing Fabianski.

The hopes of a fightback were immediately hit as Holebas was sent off for hauling back Antonio as the West Ham forward burst through on goal.

The dismissal also means that, bar a successful appeal, the 34-year-old will be suspended for Watford at Wembley next week.

Watford still pushed for an equaliser and Zabaleta was again found wanting, this time Felipe Anderson making a last-ditch challenge to keep the visitors in front.

Deulofeu drew a save from Fabianski before substitute Andre Gray saw a penalty shout denied as he tangled legs with Arthur Masuaku.

Arnautovic then secured the points for West Ham, sliding in to turn home the loose ball after Anderson’s measured volley had come back off a post.

Noble notched his fifth of the season, sending Foster the wrong way from the penalty spot after Kiko Femenia felled Antonio in the box to seal a fine win for Manuel Pellegrini’s men.