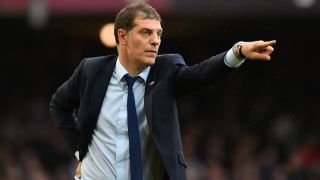 Slaven Bilic says West Ham are still looking for new players this month, though he stressed the club will not be forced into panic buys.

Defender Sam Byram completed his move to Upton Park on Wednesday after agreeing a switch from Leeds United.

Injuries to strikers Andy Carroll and Diafra Sakho have led to speculation that a short-team deal for a centre-forward is next on Bilic's agenda, with Emmanuel Emenike linked with a loan move.

But while the Croatian confirmed he is still seeking ways to bolster his squad before the end of the transfer window, he maintains there is no rush to bring in new players.

"We are still looking around for more players, but we are not panicking. We are not desperate to do anything. I am happy," he said.

Bilic is delighted to have won the race to sign Byram this week and revealed West Ham have long been monitoring the progress of the right-back.

"We're delighted to have signed Sam. He's a great buy for us. He's still young, he's English and he has a lot of experience," he said.

"I like working with young, hungry players. I have been very honest with him about what I expect, and where we think he can improve

"He's been on our radar for quite a while and we have very high hopes and expectations for him."

Bilic also confirmed that Joey O'Brien is fit to return for Saturday's clash with Manchester City.