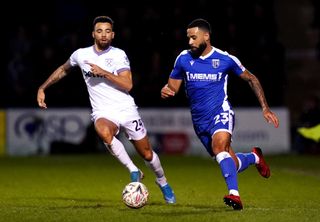 West Ham defender Ryan Fredericks will be out for around six weeks with a hamstring injury.

Hammers head of medical Richard Collinge said: “Ryan injured his hamstring while chasing back late in the first half and was assessed immediately before undergoing a scan.

“He will now begin a period of rehabilitation and recovery, with the plan being to return to action before the end of February.”

Hammers boss David Moyes may need to dip into the loan market for a right-back with the club facing a hectic January schedule.

Pablo Zabaleta replaced Fredericks and scored West Ham’s opening goal, his first for the club, but the Argentinian turns 35 next week and will struggle to play week in, week out.

“January is a big month for us, we have a couple of midweek fixtures and a really big rearranged one against Liverpool,” said Moyes.

The 32-year-old, who spent two seasons at West Ham before moving to Boro in 2017, will provide cover for Lukasz Fabianski, replacing error-prone Spaniard Roberto as second choice.

Moyes is still waiting to hear whether West Ham can agree a deal for Benfica midfielder Gedson Fernandes.

The Hammers reportedly face competition from Everton to land the 20-year-old Portugal international on loan.

Asked if the deal was close to being completed, Moyes said: “I can’t tell you. Your question is very straight and I can’t say if it will happen.

“We would like to add to the squad but we need to get the right players.”