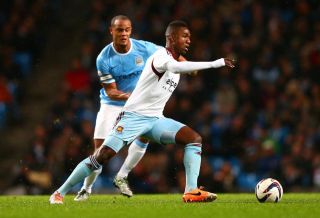 The 26-year-old Mali international has failed to establish himself at Upton Park following his move from Sochaux two years ago, scoring only six goals in 37 appearances, and will return to Ligue 1 with Albert Cartier's side.

Maiga spent a loan spell with QPR in the Championship last season, finding the back of the net just once in eight games for Harry Redknapp's side.

And he will now look to resurrect his career with Metz, who have the option of signing him on a permanent basis at the end of the 2014-15 campaign.

Maiga, who played for Le Mans before moving to Sochaux, could make his debut against Lyon on Sunday.