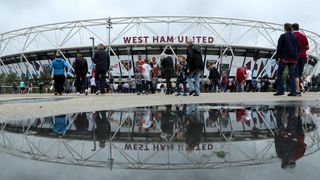 West Ham have suspended head of recruitment Tony Henry pending an investigation after allegations he sent messages to an agent saying the club did not want to sign African players.

The Daily Mail claimed to have seen emails from Henry speaking disparagingly about players from Africa, recalling difficulties the club had with Senegalese striker Diafra Sakho.

It was reported that Henry had said African players "cause mayhem" when not selected in the team.

Sakho was sold to Rennes in January, ending a tough time at London Stadium affected by injury.

It was announced on Thursday that Henry had been suspended.

"The club can confirm that Director of Player Recruitment Tony Henry has been suspended pending a full and thorough investigation," read a Hammers statement.

"West Ham United will not tolerate any type of discrimination and has, therefore, acted swiftly due to the serious nature of these claims.

"The West Ham United family is an inclusive one where, regardless of gender, age, ability, race, religion or sexual orientation, everybody feels welcome and included.

"The club will make no further comment until the investigation has been concluded."