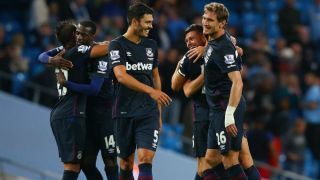 West Ham began the season with a series of impressive away performances, including a 2-1 victory over Manuel Pellegrini's side at the Etihad Stadium in September.

Although Bilic's team have won just three of their last 12 top-flight fixtures, they remain in the hunt for European football in sixth place, having not lost in eight matches on home soil.

The Croatian feels they have a chance of continuing that run against City, though he acknowledged they must nullify Sergio Aguero, who has scored four and assisted two in seven Premier League appearances against West Ham.

"We have beaten them already this season. I think they are better now, but we are confident and know what we can achieve," Bilic said.

"There are still many, many games to be played. But for where we want to finish, we can't afford to drop too many points.

"Sergio Aguero is one of the best strikers in the world. He is really an unbelievable player, his movement and finishing is top class."

City's 2-1 win at Watford on January 2 ended a run of six top-flight away matches without a victory, with their difficulties in picking up points on the road hindering their title bid.

Pellegrini's men are just one point adrift of leaders Arsenal and second-placed Leicester City and Raheem Sterling is keen for them to make strides towards the summit as soon as possible.

"The fans had been singing my name and that we're top of the league. It was a nice feeling," he is quoted as saying by the Manchester Evening News.

"But we have to get back to the top of the league so they can start singing it again. Hopefully that will happen in the next couple of weeks.

"When I came here I knew this was a club challenging to win as many trophies as possible and with the investment made it's good that we are still in the hunt for everything.

"But with the squad we have that’s exactly where we should be – and we'll see where we are at when we get to the end of the season."

James Tomkins could join Diafra Sakho, involved in a car crash during the week, Andy Carroll and Manuel Lanzini on the sidelines, but Joey O'Brien is back in the West Ham squad.

Fernandinho has returned to training having missed City's last three games with a knock, while Eliaquim Mangala (hamstring) and Wilfried Bony (calf) are also nearing returns.