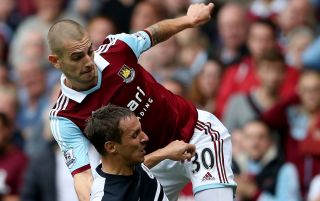 The Croat scored against Charlton as he made his first full appearance since former club Fulham's 1-0 defeat at Stoke City in November - the only time Petric managed 90 minutes in a game for Martin Jol's side in his season at Craven Cottage.

Petric signed for West Ham on a one-year deal in September following his Fulham release and has since made three substitute appearances.

Sam Allardyce has been desperately short of strikers amid Andy Carroll's ongoing fitness concerns and lined up without a recognised forward at Tottenham last weekend, although his side picked up a superb 3-0 victory.

And Petric feels he is not far off peak condition, giving his side a much-needed boost in the striking department.

He told West Ham TV: "It was a good day; I played 90 minutes after a long time which was very good for me and of course I'm glad to score a goal but it's only a friendly, so it doesn't count for too much.

"It was good, not just for my fitness, but some other players as well and it was very important to get 90 minutes.

"I feel better and better each day and I don't think it's long before I will feel 100 per cent fit.

"My fitness is much better than when I started three weeks ago. I saw how big the difference was between me and the other players and now I feel like every day that difference is getting smaller and smaller."