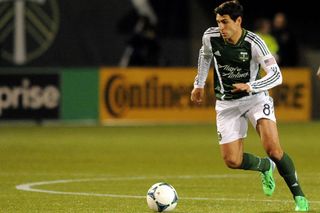 With two regular-season games remaining, the conference-leading Timbers can secure their play-off spot with at least a draw.

But head coach Caleb Porter will be eager for his side to finish top and set themselves up for a good run at the MLS Cup.

The Timbers are unbeaten in six matches and, if their matches against Real Salt Lake from earlier this year are anything to go by, expect a high-scoring affair.

Portland's success has been built on a strong defence, while Argentine midfielder Diego Valeri has impressed, yet could miss with an adductor injury.

But the Timbers' matches against Real Salt Lake, the league's highest-scoring team, have finished in 2-1 and 4-2 losses and a 3-3 draw.

Elsewhere in the Western Conference, the third-placed Los Angeles Galaxy will be aiming for a third straight win when they host the San Jose Earthquakes on Sunday.

The Seattle Sounders need a return to form or could miss out on the play-offs, but they have a huge chance to claim a win at FC Dallas.

The Colorado Rapids are fighting for fifth spot and meet the Vancouver Whitecaps.

In the Eastern Conference, the Houston Dynamo can take another step towards the play-offs with a win over the high-flying New York Red Bulls.

New York are one of two teams to have sealed a play-off place – Sporting Kansas City being the other – but are yet to secure top spot.

Kansas City host lowly DC United on Friday and could be top of the conference by the end of the round.

Marco Di Vaio's Montreal Impact will be eager to end a six-match winless run in the league when they host the Philadelphia Union.

The New England Revolution remain in play-off contention ahead of their clash against the Columbus Crew and the Chicago Fire are hanging onto fifth spot ahead of their meeting with Toronto FC.