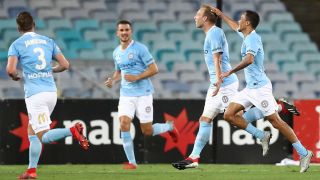 Melbourne City began 2019 by moving back into the A-League's top four as the outstanding Eugene Galekovic kept Western Sydney Wanderers at bay in a 2-0 away triumph.

City's speed on the counter initially proved the undoing of the sloppy Wanderers, who have now won just once in seven matches, as Lachlan Wales and Ritchie de Laet found the target in quick succession, before goalkeeper Galekovic came to the fore.

Rostyn Griffiths was foolishly sent off for City, but Galekovic made a string of stunning saves, most notably keeping out Oriol Riera's late penalty to preserve his clean sheet.

The out-of-sorts Wanderers slumped to a third consecutive defeat at ANZ Stadium and were jeered on the full-time whistle in a frustrating start to the new year.

There was little incident of note in a scrappy opening 35 minutes before some lax defending allowed Wales through to break the deadlock, the City forward sprinting clear from Dario Vidosic's long throw-in on halfway and finishing coolly.

And the visitors swiftly struck again. Riley McGree spun into space on the right and then laid on a pass for De Laet to drill across Vedran Janjetovic and into the bottom-left corner.

An excellent Galekovic save then denied the Wanderers' Bruce Kamau, but the hosts were boosted following the restart as Griffiths, already booked, lunged into a challenge on Alex Baumjohann and saw red.

The league's best defence stood firm, though, and Galekovic followed up instinctive stops from Baumjohann and Abraham Majok by springing to his right to keep out Riera after Nathaniel Atkinson had handled.