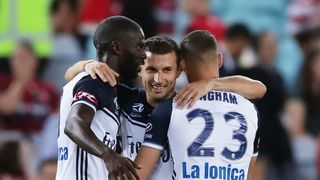 Kosta Barbarouses completed a brace in stunning fashion as Melbourne Victory cruised to a 3-0 A-League victory at Western Sydney Wanderers.

The New Zealand forward has now scored four in his past three Victory matches to move on to seven from 13 this season.

Victory, who edge back into third above rivals Melbourne City on goal difference, were happy to let their hosts hog possession for spells until springing forward on a clinical 36th-minute break, with Barbarouses surging in from the right and dispatching a crisp finish.

Leroy George made it four assists in his past two outings by leading the Wanderers defence a merry dance and teeing up Besart Berisha in the 68th minute.

Western Sydney lie sixth after a first defeat in five and Barbarouses capped their misery by rifling into the top corner from 25 yards in stoppage time.