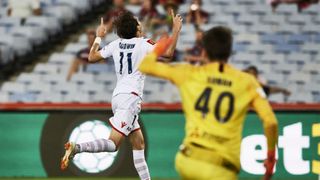 Goodwin was the provider when the visitors took an eighth-minute lead – the left winger's cutback to the edge of the box slammed through Nick Suman's attempted save by Vince Lia.

Wanderers were back on terms early in the second period as Roly Bonevacia curled an exquisite free-kick over the wall from 20 yards and into the top-left corner.

But Goodwin settled matters in the 66th minute, shifting the ball on to his left foot to arrow across goal into the bottom-right corner from inside the box.

Adelaide full-back Scott Galloway almost made it 3-1 in stoppage time when he exchanged passes with Goodwin and hit the outside of the post.

Marco Kurz's side remain sixth, level on points with Wellington Phoenix and one behind Melbourne City in fourth.

Wanderers are third bottom above the similarly out-of-sorts Brisbane Roar and Central Coast Mariners – who finally claimed their first win of the campaign at home to Melbourne City this week.