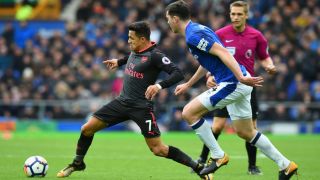 Michael Keane believes Everton have let Ronald Koeman down after Sunday's 5-2 humiliation at the hands of Arsenal left the under-fire Dutchman on the brink.

It was Everton's fifth defeat in their last seven Premier League matches and saw them drop into the bottom three, a huge shock given their £142million spending spree in pre-season.

Everton initially took the lead early on through Wayne Rooney's lovely strike, but their joy was short-lived, as Arsenal ultimately battered their hosts – Nacho Monreal and Mesut Ozil initially turning the game on its head.

Alexandre Lacazette, Aaron Ramsey and Alexis Sanchez rounded things off late on, with Oumar Niasse's goal nothing more than a consolation, and Keane was left surmising that Everton have simply lost confidence.

"I think so," he told Sky Sports when asked if they were sapped of confidence. "Normally everyone would want to get on the ball and show what they can do.

"Maybe you're not seeing that now. It was a difficult day. It's down to us, the manager can only do so much.

"We have 100 per cent belief in him. We feel like we've let him down. We're working really hard to sort it out."