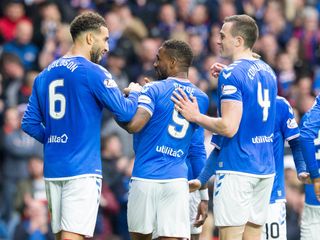 Rangers took over at the top of the Ladbrokes Premiership table after an eventful weekend which saw Old Firm rivals Celtic suffer their first defeat of the season.

After Celtic’s shock 2-0 loss at Livingston had opened the door for the Light Blues to hit the summit for the first time this season, Steven Gerrard’s side made no mistake, thumping Hamilton 5-0 to move two points clear after eight games.

Here, the PA news agency takes a look at who topped the table at this stage in each of Celtic’s eight title-winning campaigns since 2011-12.

A lightning-quick start to the season saw Hearts top the embryonic standings with 19 points after eight games. Their Edinburgh rivals Hibernian were two points behind in second, with Celtic third on 16 points. The Jambos won their opening five league matches – a run which included a 1-0 home victory over Celtic – before extending their unbeaten start with a draw against Livingston and victory over St Johnstone. Their first defeat came in their eighth league match as Rangers ran out 3-1 winners. Hearts collapsed towards the end of the season, though, picking up just one point from their last seven games to finish at the bottom of the top six with 51 points.

Celtic topped the table on goal difference alone after both they and Aberdeen won six and drew two of their first eight league games to reach 20 points. The Parkhead club went on to win the title, finishing nine points ahead of the Dons.

Celtic started the season with seven wins and a single draw to sit on 22 points and establish a four-point lead over second-place Aberdeen, who had played a game more at that stage. The Hoops eventually finished a whopping 30 points clear at the summit after going unbeaten for the entire league campaign.

The Dons began their league campaign with eight straight victories to hit the maximum 24 points. That gave them a five-point advantage over second-placed Celtic, who they beat 2-1 at Pittodrie in September. Celtic eventually leapfrogged the Dons and won the league title by 15 points, with Aberdeen coming second with 71 points.

An impressive start to the season saw Dundee United sit top with 19 points after eight matches. They won six of those games, drew against Hamilton and were beaten 6-1 by Celtic, who were five points behind the Terrors in fourth having played a game less. Dundee United went on to finish fifth, while Celtic won the league title by 17 points.

An unbeaten start to the season, which included seven wins and a single draw, saw Celtic lead the way with 22 points. They were three clear of nearest challengers Inverness, who had played nine games at this point. Celtic finished the campaign with 99 points to claim another league crown.

Celtic were two points ahead of second-placed Hibernian after winning five and drawing two of their opening eight games to sit on 17 points. Many of the Hoops’ nearest challengers had played a game more than them. Celtic were comfortable league winners that season, finishing 16 points above Motherwell in second.

Gers opened up a four-point lead over second-placed Celtic after following up their opening-day draw against Hearts with seven straight league wins to rack up 22 points after eight games. That impressive streak included a 4-2 Old Firm triumph at Ibrox in which Steven Naismith bagged a brace and Kyle Lafferty and Nikica Jelavic also scored. But Celtic went on to win the title by 10 points, with Rangers finishing a distant second.