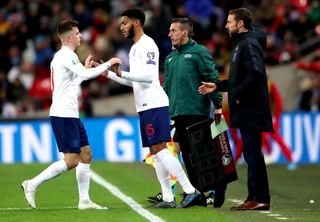 England defender Ben Chilwell says the whole squad is behind Joe Gomez after he was booed against Montenegro.

The Liverpool defender was jeered by home fans at Wembley as he came on as a second-half substitute in the 7-0 win that sealed Euro 2020 qualification.

Gomez has been at the centre of a media storm this week after his altercation with Raheem Sterling at St George’s Park which saw the Manchester City forward dropped.

To all the @England fans, I wanted to leave things at it was but tonight I have to speak again : it was hard for me to see my team mate get booed for something that was my fault. Joe hasn’t done anything wrong & for me to see someone who keeps his head down and work hard..— Raheem Sterling (@sterling7) November 14, 2019

Sterling and boss Gareth Southgate fiercely condemned the crowd who booed him and said it was unacceptable.

Chilwell also spoke out on the matter, insisting no player should be abused by their own fans.

“I have known Joe for a long time and it is not nice to hear that sort of thing,” he said.

“No one deserves to get booed, everyone is behind Joe he is a great player and a great guy and we all support everyone.

“I just want and everyone wants the fans to get behind the whole team. We are going to support Joe and Joe is a very strong character.

“He played well when he came on and we are all behind him.

“Joe is a strong character. He has been great this week in training. His normal self. We all moved on from it the day after it happened.

“We are going to be supportive of him and behind him.

“Everyone has moved on from it in the camp. We just want everyone else, the fans, to move on from it as well.

Chilwell played a key part in England’s rout – their biggest win at the new Wembley – as he bagged a hat-trick of assists in the first half.

That helped the Three Lions seal their place in next summer’s European Championship and guarantees them all three group games at Wembley – with a semi-final and final also at the national stadium.

The Leicester left-back was not born last time England hosted a tournament back in 1996, but he hopes he can be part of something special.

“I don’t remember Euro 96, I wasn’t born, but hopefully we can make it a great occasion.

“We are all looking forward to it. We spoke before the game about making Wembley a fortress and using it to our advantage and with performances like that the stadium is going to be rocking.

“We are really looking forward to having the games here in the summer.

“It is a massive opportunity. Having at least three games here is massive for us and to use that home advantage could be key.

“Games like this where we put on a good performance and get the fans behind us is important going into the summer.