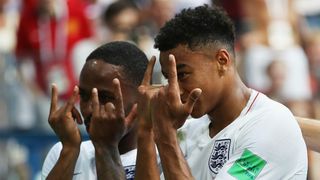 Of all the things to underline Gareth Southgate's first major finals as England boss, three stand out.

One: he has reached a World Cup semi-final, the first in 28 years. Two: he has transformed the mentality among the fanbase from apathy and anger to nonplussed enjoyment. Three: he has made Raheem Sterling simultaneously the most criticised of players, and arguably the most important.

Southgate's system relies on his attacking midfielders providing a multitude of elements but, ironically, creating goals seems to have been the least important in Russia. His trio of Sterling, Jesse Lingard and Dele Alli have all been targeted to varying degrees, whether it's for poor finishing, alleged diving or simply celebrating goals in a certain way. But not one is likely to be dropped against Croatia, in the biggest match for England in a generation.

But should they be?

At Luzhniki Stadium on Wednesday, England will come up against a Croatia team against whom it is difficult to score (even accounting for their 2-2 draw with Russia in the quarter-finals) and who boast Luka Modric as a number 10. If any match is likely to expose Southgate's lack of playmakers, it is this one.

Modric has been wonderful in these finals. His partnership with Ivan Rakitic has been described by coach Zlatko Dalic as the best in the tournament. Team-mate Mario Mandzukic has already tipped him for the Golden Ball prize. Rakitic himself told Omnisport after the last-16 win over Denmark that "Luka did so much for us in the last 10 years, and now we have to do it for him".

Compared with England's attacking midfielders, Modric's numbers are certainly strong. As a playmaker, he has created 14 chances overall in Russia, four more than Lingard, Sterling and Alli combined. He has completed 153 more passes than any of those three, 62 of which have been into the final third. Alli leads England's numbers on 11.

The 32-year-old has also completed more dribbles (13) than all three of Lingard, Alli and Sterling put together, despite their obvious advantages in terms of age and speed. Off the ball, he has a better duel success rate (53 per cent) than England's trio, and a vastly superior number of recoveries (42), to Lingard and Alli's 17.

Statistics like this paint a foreboding picture for England. After all, Harry Kane is leading the Golden Boot race with six goals, having scored three penalties, two headers and one deflection. The prospect of how many he might have if England had a playmaker like Modric is tantalising to say the least to Three Lions followers.

But making such a point is to fundamentally misunderstand what has made Southgate's side so effective.

Head On A Swivel, I Could Shoot But I Could Never Dribble July 9, 2018

While a trequartista would have been welcome against a belligerent Colombia defence, it would not have helped to contain their threat on the break. Lingard, Alli and Sterling have won five tackles and 15 fouls between them in England's five matches, showing just how infuriating their first line of pressing can be to opposition defences, stopping them from exploiting space with quick moves forward.

Equally, they have made life extremely difficult for teams such as Tunisia and Sweden, whose game is predicated on a solid defensive shape. They have combined for 71 forward passes, which is no mean feat for players so close to the opposition goal, and have touched the ball in the opponents' penalty area 14 times each on average. Modric has done so on six occasions.

And, while Alli and Sterling's passing accuracy is below that of Modric, Lingard's is actually better. The Manchester United man has only misplaced 10 of his 151 attempted passes at the World Cup, a feat that would probably be deemed staggering had it been done by a player who had never dabbed before.

Simply put, Southgate would probably have no hesitation in fielding a quality playmaker if he had one in his squad. Instead, he is using three of England's most confident young attackers as part of a system designed to inflict maximum disruption from front to back, and open up chances of snatching a goal. If it gets England to a first World Cup final in 52 years, who will blame him for it?