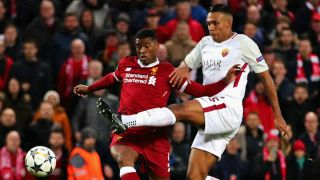 Georginio Wijnaldum insists Liverpool have no fear of a Roma fightback in the second leg of their Champions League semi-final, having already proven they can preserve a first-leg lead against Manchester City.

Liverpool take on Roma at the Stadio Olimpico on Wednesday holding a 5-2 advantage from the first meeting between the teams at Anfield, a victory inspired by a stunning brace from Mohamed Salah against the club he left to move to Merseyside in June.

Roma reached the last four by coming back from a 4-1 first-leg deficit against Barcelona in the quarter-finals, stunning the Catalans 3-0 in the Italian capital to progress on away goals.

The same result would be good enough for Roma to reach the final but Wijnaldum is adamant Liverpool are not scared, pointing to the performance in the last eight against City as a reason for their confidence.

Liverpool beat City 3-0 in the first leg and, after going a goal behind in the return fixture, responded to win 2-1 and progress 5-1 on aggregate.

Speaking at a media conference, Wijnaldum said: "[There is] no foot in the final, you can only have two feet or none.

"Strange things have happened before in the Champions League, Roma have showed against Barcelona they can turn things around so we have to be aware of it. We showed versus City we can keep the lead, but both teams will have confidence.

Gini: "There is no foot in the final. You can only go with two feet in the final. Strange things happened before with games in the . Roma have shown they can turn things around, so we have to be aware of that."Watch live and free May 1, 2018

"We're not scared because we showed we can compete and keep a lead. Two teams will have confidence, one of turning it around and one of keeping a lead, so it will be an interesting game. We are not scared, but we are aware of their quality."

Liverpool fan Sean Cox was left in a critical condition after an incident outside Anfield before the first leg.

Asked about the squad's reaction, Wijnaldum said: "We didn't know at the beginning, we heard the day after. It's not a nice feeling to hear someone got injured, we were devastated. You have to think about more than that so we have to go forward but of course we felt it.

"It's a game of joy, everyone has to enjoy it, but everyone also has to be safe. It's not a good thing that this happened."