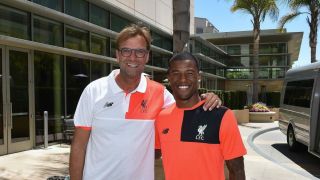 Georginio Wijnaldum has revealed that the opportunity to work with Jurgen Klopp prompted him to choose to sign for Liverpool over their Merseyside rivals Everton.

Though unable to prevent Newcastle United's relegation from the Premier League last term, Wijnaldum's 11 goals in 36 starts caught the eye of several clubs, with Tottenham also thought to be interested.

But the 25-year-old claims a meeting with the charismatic Klopp was enough to make up his mind.

"He made me feel really good straight away," said Wijnaldum.

"He gave me a lot of confidence, he told me he liked my way of playing football and that he wanted to have me in his squad.

"He is a great trainer. He showed what he could do at Dortmund and it lifted me to hear that he wanted me.

"Straight after the conversation I had with him, I made my mind up.

"I had a feeling that I wanted to join Liverpool. They are a big club, with a big history. I know that, everybody knows that but the feelings have to match.

"I was waiting to see what interest Everton showed in me but Liverpool's interest was greater. Jurgen gave me a good feeling in the conversations I had with him, so my mind was made up."

Former Anfield boss Rafa Benitez was unable to rescue Newcastle in his 10 matches in charge and Wijnaldum pointed to the Spaniard's ambitions for the Magpies to bounce straight back up.

"Rafa just said that Liverpool is a big club," Wijnaldum said. "The biggest thing he said was that he wanted to keep me for Newcastle.

"He didn't want to sell me but he said that if a great offer came in they would think about it. He wanted to keep me there.

"He didn't say: 'You need to go to Liverpool' because he wanted me to stay at Newcastle."