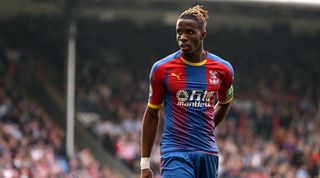 The Gunners were rejected with their opening £40 million bid as their Premier League rivals hold out for twice that figure.

According to the Mirror, Arsenal are now considering inserting Calum Chambers, Carl Jenkinson or Mohamed Elneny into a bid.

They are determined not to give up on the Ivory Coast international, who is said to be keen on making a summer switch to the Emirates.

Zaha could be prepared to push for the move with £70m likely to be enough to convince Palace to sell, but the Eagles’ determination not to let their star player go was strengthened by Arsenal’s opening bid.

Unai Emery is understood to have a transfer budget of just £45m and therefore might have to divert attention towards other targets if Arsenal fail with their next bid.

Celtic left-back Kieran Tierney remains a priority, while the Gunners also want to bring in a centre-back and a midfielder.

An agreement has been reached with Saint-Etienne for the signing of defender William Saliba, but he will be sent back on loan and the £26m fee will be spread out.