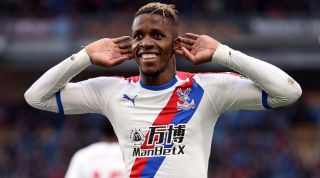 Wilfried Zaha celebrates his goals in such an affecting way. His muscles tense and his face contorts, and in those few seconds he looks like a player who would never leave Crystal Palace.

That relationship is such a seductive dynamic. When Palace are behind in games or are searching for a goal, there’s something old fashioned about how uncomplicated they are in their approach. Keep giving Wilf the ball and, eventually, those blurring feet will make a defender panic.

However that commodity is described, it's invaluable to Palace.

Arsenal disagree. Their £40m offer was rejected out of hand. There remains the suggestion of an improved offer, but not one which will come close to the £100m that Steve Parish hopes to receive. Even with the threatening sub-text of player pressure, a compromise seems unlikely. Unusually, though, it remains a situation of equal arguments.

Arsenal have a hierarchy of pressing needs and more dynamism which, while always useful, isn’t near the top of the priorities list. It’s certainly difficult to argue that Zaha, for what he represents and the issues he would cure, is worth more than £40m to the Gunners.

But neither is Palace’s valuation exorbitant. The evaluation of transfer stories is nearly always weighted towards the buying team. The focus, inevitably, is aimed at what the new player can bring, where in the formation he will play and what he can help his new side achieve.

Conversely, analysis of impact on the selling club is typically reductive, often treating the player as an isolated and disconnected commodity, minimising the fractures created by their departure.

Ironically, given that he’s so often presented as an individual – the hero character at Selhurst Park – Zaha is probably as deeply embedded within his side as any player in the division. He’s certainly indulged and allowed to take risks with the ball that others aren’t, and the emphasis on his defensive work-rate also isn’t that pronounced. But while the superficial perception may be of a luxury item existing outside the general framework, technical considerations aroused by the prospect of his sale render that an illusion. In fact, in the event of his departure, Palace’s entire approach would have to change.

Currently under Roy Hodgson – as they have been since arriving back in the Premier League – they are a counter-attacking side. The system’s success depends, of course, on a rigid, well-disciplined defence and a screening midfield, but also on the potency of an exit strategy – the means by which a team alleviates pressure and advances upfield. Zaha is systemically ideal within that role. He can carry possession quickly and vertically, meaning that any side attacking Palace must always proceed with caution. By implication, losing that facility would necessitate a major reinvention – in style, of course, but also in personnel.

The nature of Palace's midfield would have to change. While they split time in 2018/19 between a 4-4-2 and a 4-3-3, all of their most-used midfielders – with the exception of Max Meyer – were restricting in nature. Without the dynamism offered by Zaha, there would be an imperative to reconfigure that unit in a way that allowed more control. Between them, Luka Milivojevic, James McArthur and Cheikhou Kouyate may comprise a tough shield, but without being supplemented by more vertical and aggressive attributes they threaten to leave any attacking department on an island. The response would certainly involve a major change in mentality, which is difficult to impart over a single pre-season, but also a major signing to alter the midfield’s texture.

Aubameyang: Meeting Lacazette at Arsenal was "love at first sight"

That, in itself, is not a rare problem. Losing a highly influential player always causes difficulties. Most often, it also unearths issues which that player’s strengths have hitherto disguised. How secure would Patrick van Aanholt be at full-back, for instance, if the threat of Zaha was removed and an opposition’s caution down that left side was reduced? Would Palace become more susceptible to overlapping full-backs and, in turn, would that reveal a deeper fragility in the centre of defence? That type of thinking is highly speculative and ultimately tenuous, but it’s indicative of the kind of considerations which have to be made.

None of those factors, though, are as pressing as the potential effect on Hodgson's forward line. Zaha is neither an orthodox centre-forward nor solely a left-winger, but he is talented enough to cover both positions almost at the same time. Within the same game, he often manages to compensate for the lack of an effective No.9, and also – along with Andros Townsend – disguise the fact that this squad is desperately short of natural, or even inverted width. It could easily be argued that his departure would necessitate significant reinvestment in not just a literal replacement, but three separate players.

Whether the cost of those three players would exceed £100m is a separate issue, but that valuation is a vague measure of the task’s complexity. So, while the maxim dictates that a footballer is worth what another club is willing to pay for him, a more accurate appraisal – in this instance at least – is that a player’s price, in the eye’s of a realistic chairman, should be the aggregate cost of patching the holes he leaves behind.

Premier League TV schedule: When your club has been picked for live coverage in 2019/20