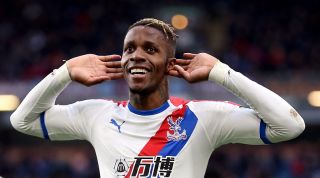 Crystal Palace have ruled out selling Wilfried Zaha to a European club this month, report the Daily Express.

The Ivory Coast international handed in a transfer request this week but was unable to seal a move away from Selhurst Park before the Premier League's transfer window closed on Thursday.

European sides are permitted to complete deals until the end of August, and Borussia Dortmund and Napoli have reportedly been keeping tabs on the situation.

However, Palace are adamant that they will into allow their star man to depart now that they are unable to secure a replacement.

Zaha may attempt to force through a transfer in the January transfer window, but he will spend the first half of 2019/20 with the Eagles.

Roy Hodgson's side begin their Premeir League campaign against Everton, who had a £65m offer for Zaha rejected earlier this week.

The 8 most momentous opening-day matches in Premier League history