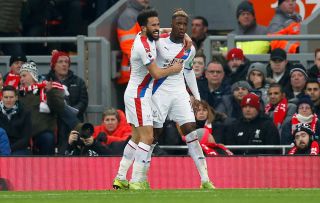 Andros Townsend believes Wilfried Zaha has matured into the talisman that Crystal Palace hope to have for some time yet.

Zaha’s 10th goal of the season – the first time he has reached double figures in a Premier League campaign – set up a 3-2 Palace victory that relegated his former club Cardiff.

The 26-year-old has scored six times since being sent off at Southampton in January for sarcastically applauding referee Andre Marriner’s decision to book him after he had squared up to Saints midfielder James Ward-Prowse.

“I think he had a spell this season where he was picking up yellows for dissent and got a red card against Southampton,” Townsend said.

“I think that was the turning point where he realised he had to mature.

“Ever since then he has been incredible for us, he’s been in great goalscoring form when we needed it most.

“He’s matured. He’s not allowed fouls or bad refereeing decisions to affect him. He’s been the talisman we know he can be.”

Zaha, who returned to Palace on a permanent basis in 2015 after a nightmare two-year spell at Manchester United, signed a five-year contract last summer to become the Eagles’ highest-paid player.

But the Ivory Coast forward put his future into doubt last month by admitting he wants to leave Roy Hodgson’s side in search of Champions League football.

Townsend said: “We’re lucky to have him at Palace and hopefully we can keep him for a little bit longer.

“The players, the manager, the staff, the fans all love Wilf and all want him to stay.

“He’s a top-class player and, without doubt, the most naturally talented player I’ve ever played with.

“If you see some of the stuff he does in training on a day-to-day basis, it’s incredible.

“But if that day does come this summer, next summer or the summer after where he feels like he has to move on, we’ll give him our best wishes.”

Townsend produced a superb solo effort for the winner at Cardiff after Zaha and Michy Batshuayi had put Palace in control before the break.

It was the England international’s eighth goal of the season, but his first in 16 games stretching back to January.

Palace’s win was their ninth away from home this season and took them to 46 points.

The 12th-placed Eagles will record a club-best points total from a 38-game Premier League campaign by beating Bournemouth at home on the final day next weekend.

“It’s very strange, especially at Selhurst where our fans are incredible,” Townsend said reflecting on the poor home form which has brought only four wins all season.

“You would have thought that’s where our fortress would be.

“Unfortunately we have to accept that teams are coming to Selhurst, respecting us, getting men behind the ball and making it difficult for us to break them down.

“That next step is to be more consistent as a team, and that starts at home.

“We’re a talented group. If we can keep one or two of our main players, who knows what we can achieve.”