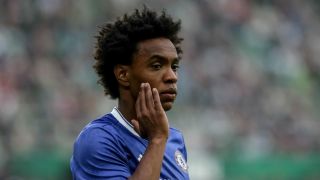 Chelsea attacking midfielder Willian expects the 2016-17 Premier League season to be the toughest in history.

In a dismal attempt at defending their league title, Chelsea finished 10th last term and will be led by new manager Antonio Conte as they seek a return to the upper echelons in the forthcoming campaign.

The two Manchester sides have also been tipped for a title push, with ex-Blues boss Jose Mourinho taking the reins at United and Pep Guardiola in charge of City

Defending champions Leicester City, as well as Arsenal, Liverpool and Tottenham are all hoping to be in the mix at the top of the table, so Willian expects it to be harder than ever to come out on top.

"I think this season will be the most difficult in history, because there are so many managers," said the 27-year-old.

"Mourinho, Guardiola, Conte here and the others - and I think it will be difficult for everyone.

"But we have a great team and we have to show that on the pitch."

Willian signed a new four-year contract at Chelsea this month and is excited to be continuing his career at the club.

"I am really happy to sign a new contract with Chelsea," he said, before adding with a chuckle: "Now I am Chelsea forever."

Michy Batshuayi and N'Golo Kante have been the first two big-name additions under Conte and Willian is confident they can help boost the club's chances of success.

"They bring a lot of quality for sure, they come to help us and I think - if more players arrive - those will come to help as well," added the Brazil international.