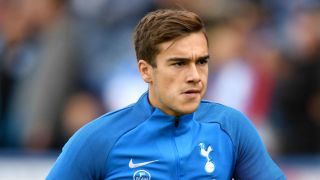 England manager Gareth Southgate has called up Tottenham midfielder Harry Winks, after both Fabian Delph and Phil Jones were forced to withdraw from the squad.

Having trained with Aidy Boothroyd's Under-21 squad ahead of games against Scotland and Andorra on Monday, the uncapped Winks has now been drafted into the senior party for the first time in his career.

The move was made after both Delph and Jones were sent back to Manchester City and Manchester United respectively to undergo further treatment for injuries.

Unable to train with their international team-mates on Monday, the duo will miss the upcoming World Cup qualifiers against Slovenia, which takes place at Wembley on Thursday, and Lithuania.

Southgate is also without midfielder Dele Alli for the first of those fixtures - the Tottenham player is serving a one-match suspension after being caught on camera making a one-fingered salute during the home win over Slovakia in September.

England top Group F and can seal a place at next year's tournament in Russia with a win in their next game. They complete their qualifying campaign with a trip to Vilnius on October 10.