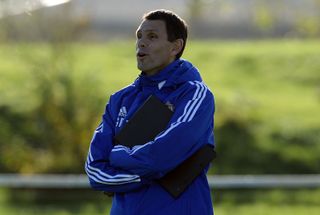 Poyet - who replaced Paolo Di Canio as manager at the Stadium of Light earlier this month - saw his side crumble to a 4-0 loss away at Swansea City in his first game at the helm.

Sunderland remain rooted to the bottom of the Premier League with just one point taken from eight fixtures this season but, in an odd coincidence, Poyet faces Newcastle in his second game in charge - just as Di Canio did during his brief tenure.

The Italian oversaw a stunning 3-0 victory at St James' Park on that occasion, and Poyet is eager to replicate that scoreline this time around.

"I would take that result now," Poyet said ahead of the fixture at the Stadium of Light.

"It is a coincidence (that both his and Di Canio's second game were derbies) so it is not something you can analyse.

"But what is clear is that we need to win this game. It is a perfect game for us, and it is the one that all the fans want you to win.

"The fans I have met have all told me that we have to win on Sunday - they care more about that than anything."

Poyet will take charge of his team for the first time on home soil, and he admits that he wishes he could still be involved on the pitch on derby day.

"These are the only games I miss," the Uruguayan said.

"I don't miss any other games apart from the big ones, and this is massive.

"The derby games are the ones that, when you are on the outside, you really want to be on the pitch doing something to affect the game."