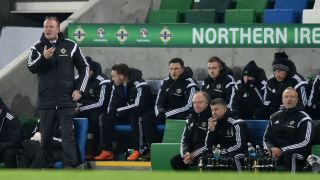 Northern Ireland manager Michael O'Neill was happy with his side's performance after they beat Latvia 1-0 at a sold-out Windsor Park to maintain their momentum ahead of Euro 2016.

O'Neill's men topped Group F to qualify for their first major tournament in 30 years and are now unbeaten in eight matches after skipper Steven Davis scored to settle a tight game.

Northern Ireland had not won an international friendly since March 2008, but Davis' goal early in the second half was enough to seal the victory in front of a celebratory crowd.

"It was important to keep up the winning momentum," O'Neill told BBC Sport.

"I thought we controlled the game from the first minute to the last."

Northern Ireland experimented with a new 3-5-2 formation, with Jamie Ward pushed up alongside Kyle Lafferty in attack, while Stuart Dallas and Conor McLaughlin were deployed as wing-backs.

"We changed the system to play three at the back and I was pleased with a lot of aspects of our play," said O'Neill.

"There were some fine individual displays, although I thought our final ball could have been better in the first half and we could have created more chances in the second."

Northern Ireland now await the Euro 2016 finals draw, which will take place in Paris on December 12.