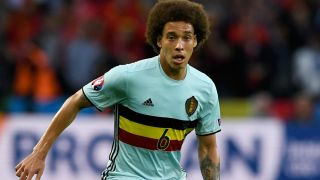 Axel Witsel has offers from both England and Italy and has asked to leave Zenit, according to coach Mircea Lucescu.

Witsel joined Zenit in 2012 from Portuguese side Benfica and has made over 150 appearances for the club, winning the Russian Premier League in 2014-15.

However, the Belgium international is intent to make the switch to a bigger league after a four-year stint in Russia.

Everton and Inter are among those reportedly interested in the 27-year-old Witsel, who still has one year left on his contract at Zenit.

"He has spoken with the club and he has asked to leave," Lucescu confirmed to Calciomercato.

"He has two offers from Italy and two from England.

"The club placed a high valuation on him because he is an important player, one of international level.

"I know that he has been offered a contract renewal, but it won't be easy. He’s had important proposals for the last two years, the transfer market is long and has its own logic.

"We are talking about a player who can do well in many teams."

Zenit face CSKA Moscow in the Russian Super Cup on Saturday, but Witsel will not feature after only recently returning from his off-season break - having helped Belgium reach the quarter-finals of Euro 2016 last month.