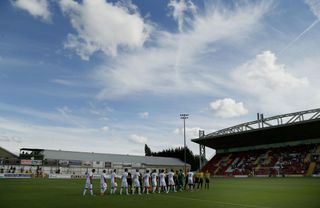 Woking communications director Ian Nicholson insisted the club will survive the ongoing coronavirus pandemic, but warned about the long-term future of other National League clubs.

No decision has been made yet as to the future of the top tiers of English football, and Nicholson would like to see some assurances.

“We heard the football league clubs were allocated £50 million to help stabilise them, I think £20 million distributed fairly between the different clubs would make a huge difference to us,” he told the PA news agency.

“It would enable us to really plan positively, but if that money is of course coming then I think clubs would really need to look at economies and so on and how they’re going to make it through.

“The danger is clubs will just disappear, they won’t be able to survive, so it really is a battle for lower league football I think.

“We will survive, because we always survive. We’re structured quite well, but that’s not minimising the challenges that it’ll be. It’ll almost be like a month-by-month endeavour really.”

Woking’s ground Kingfield has a capacity of 6,036 but the club are currently making no money, and are looking at the government’s policies to help manage finances during this unprecedented time.

Nicholson, who is also the club chaplain, strongly believes in the importance of the National League.

He added: “I think if football is to really look at itself at this time and what really matters – obviously the Premier League matters but there is a whole world beyond the Premier League, that if it was ever lost would be a tragedy.

“It would be something that could never be recovered, so I think the football world needs to look at how it can get behind National League clubs in a fair way.”

Woking are currently 10th in the National League and three points away from the play-off places, but many of the current players have contracts ending in April, potentially before the season draws to a close.

On how the players were managing Nicholson said: “Our players will be paid, certainly in the short-term.

“A lot of their contracts expire at the end of April, but obviously if the season continues, we have to find some way of keeping them under contract without paying for nothing.”