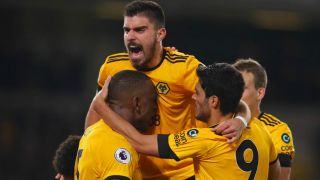 Newcastle United were denied a valuable win at Wolves as Willy Boly forced a 1-1 draw in the final few seconds at Molineux.

Isaac Hayden looked to have secured three important points for the visitors in their fight for Premier League survival, only for Boly's header to deny them a third win in four league matches in the fifth minute of injury time.

Rafael Benitez cut a furious figure on the touchline, with the equaliser coming close to a minute after the allotted time added on had expired.