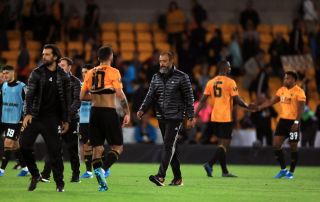 Wolves will attempt to add another fixture to their “non-stop schedule” on Wednesday when they entertain Reading in the Carabao Cup third round.

Nuno Espirito Santo’s team have yet to win in the Premier League this season, but grabbed a last-gasp equaliser at Crystal Palace on Sunday to end a run of three consecutive defeats.

The burden of the Europa League has affected Wolves, like it did Burnley last term, but this clash with Championship side Reading provides them with an opportunity to win for the first time since August 29.

After ditching his favoured 3-5-2 formation for a 3-4-3 at Selhurst Park, Nuno is expected to stick with that system at Molineux against the Royals, who have clinched two victories from eight league games this campaign.

“It’s all about trying to find solutions and what is best for the team,” Nuno said. “The first half was very good, so if the next game will be the same, we have to work on it.

“We have to work, analyse this game and see where we have to improve and make decisions for Wednesday and then for Saturday (home to Watford) because it’s a non-stop schedule.”

Since Nuno was appointed Wolves head coach in May 2017, the former Valencia manager has largely only had highs in the West Midlands.

However, his best run in the Carabao Cup was reaching the fourth round in his debut season where they lost on penalties at eventual winners Manchester City after a goalless draw.

It was a similar story in the third round last term, with Wolves and Leicester failing to find the net and the hosts exiting the competition after a 3-1 shoot-out loss at Molineux.

Nuno will hope for better this time, but will be without centre-back Romain Saiss following his red card at Palace.

He added: “We trust in our squad and every player has to be ready for that chance.”