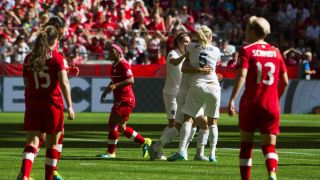 An early blitz from the English saw off Canada, who dominated the latter stages of the second half but were unable to find an equaliser as they lost 2-1.

England had fallen at the quarter-final stage of the past two World Cups, going out on penalties four years ago against France, while they were thumped 3-0 by the United States in 2007.

But despite their men's side being renowned for struggling in the knockout stages of World Cups - England have not reached the semi-finals of a men's World Cup since 1990 - Mark Sampson's team managed to break through on Saturday.

England striker Jodie Taylor put her team in front in the 11th minute with an angled drive and, three minutes later, full-back Lucy Bronze doubled their advantage in Vancouver with a scorching strike from 20 yards.

While Canada's captain and all-time leading goal-scorer Christine Sinclair managed to pull a goal back just before the break due to a goalkeeping error, England held on for a famous victory in the second half.

Sampson had to substitute starting goalkeeper Karen Bardsley just six minutes after the restart, who appeared to have been struck in the eye but replacement Siobhan Chamberlain impressed under increasing pressure to send her team into the final four.

In the earlier quarter-final, Japan overcame Australia 1-0 in a rematch of the 2014 AFC Women's Asian Cup final.

The world and Asian champions were too strong in Edmonton but had to wait until three minutes from time to score the decisive goal, with Mana Iwabuchi finishing from two yards out from Azusa Iwashimizu's deflected shot, after a scramble in Australia's penalty area.

Iwashimizu was the goal-scorer in Japan's 1-0 win in Vietnam last year to lift the Asian Cup.