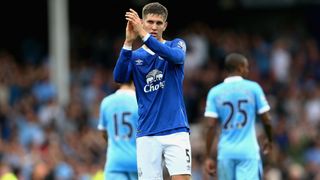 Everton director John Wood is adamant Chelsea target John Stones will not be sold before the transfer window closes on September 1.

And Everton reiterated their stance after Stones produced another impressive display in Sunday's 2-0 loss at home to Manchester City, with Wood stating chairman Bill Kenwright wants to keep him.

Stones has made 47 Premier League appearances since moving to Goodison Park from Barnsley in 2013-14.