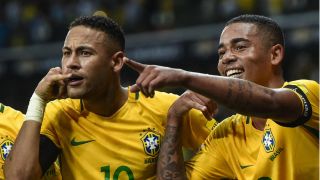 Brazil are well-placed to become world champions for a record sixth time at Russia 2018, according to Opta's World Cup Predictor.

Following Friday's draw in Moscow, where Brazil were matched against Switzerland, Costa Rica and Serbia in Group E, Opta gave Tite's side a 14.2 per cent chance of lifting the trophy and a 22.5 per cent chance of reaching the final.

Defending champions Germany are second favourites on 11.4 per cent, while Argentina (10.9) and France (10.5) are the only other teams found to have in excess of a 10 per cent chance.

Spain, winners in 2010, face neighbours Portugal in a mouth-watering Group B clash. Julen Lopetegui's men are given a 73.6 per cent chance of getting out of the round robin stage, a figure that drops to 55.6 per cent for Cristiano Ronaldo and the European champions.

England and Belgium face one another to round out Group G in a game that will be rich in Premier League talent. After Spain (16.2 per cent), Belgium are seen as the sixth most likely team to reach the final, although their figure drops to 8.2 per cent.

The Three Lions under Gareth Southgate are aiming to bounce back from recent disappointment in major tournaments but are only given a 4.7 per cent chance of making the final – lower than potential round-of-16 opponents Japan (4.8 per cent) and Colombia (5.7 per cent).

53.9% - England have a 53.9% chance of qualifying from their group and into the knockout stages based on Opta's World Cup predictor. Crunch. December 1, 2017

Hosts Russia are ranked as joint-15th favourites alongside Germany's group opponents Mexico, with a 1.7 per hope of glory. Stanislav Cherchesov's men are only given a 50.7 per cent chance of emerging from a Group A featuring Uruguay, Egypt and Saudi Arabia and reaching the knockout stages.

Tournament debutants Panama are given a 0.7 per cent chance of an improbable triumph, with only Morocco (0.5 per cent) a longer shot as tournament outsiders.

Opta's and have been discussing the outputs from Opta's predictive model to look at the teams with the best chance of victory for 2018. Foretelling. December 1, 2017

The attacking and defensive strengths are based on results from all official international matches in the four years before the World Cup. Additionally, the strengths take into account results at the 2010 and 2014 World Cups.

Several other factors are also considered as World Cup specific variables. Two "home advantages" are considered for both the home nation and teams from the host confederations. Teams having won a World Cup since 1970 also have an advantage included on the grounds of tournament pedigree.