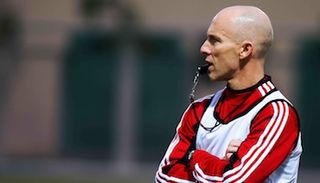 "At a time when the country is looking for things that are good, this is very important," he said of Egypt's seamless progress to the last phase of African qualifiers for next year's tournament in Brazil.

Victories in Zimbabwe and Mozambique over the last fortnight in preliminary competition ensure Egypt kept up a 100 per cent record in their group, the only African side with five wins from five matches.

They have one more to play but are guaranteed top place in their section and will take part in the play-offs in October and November which determine places for Brazil.

"This team has a strong belief, we have finished the group and now we begin to think about how to be ready for the play-offs because the goal for everyone in Egypt is of course the World Cup," Bradley said.

"To finish the group early was very important. To come away on the road and take six points says a lot about the mentality of the group," said the American after the latest triumph, a 1-0 win over Mozambique in Maputo on Sunday. They also beat Zimbabwe 4-2 in Harare.

"We have a lot of belief in what we are doing, it showed that we can win at home and on the road and now we only think about how to be ready for the playoffs," Bradley added.

Egypt's political and social upheaval in the wake of the Arab spring, has impacted dramatically on football in the country where the league only restarted six months ago after a year-long hiatus and where most matches are still played behind closed doors for security concerns.

Bradley, coach of the United States team at the last World Cup in South Africa, was an unusual choice as Egypt coach when he took the job in October 2011.

But has made a good impression in Cairo with his decision to stay on despite the turmoil of the last 18 months since a stadium riot in Port Said caused 74 deaths and led to the near shutdown of the game in the north African country.

Egypt has been increasingly obsessed by the team's failure to qualify for the World Cup since their last appearance in Italy in 1990, despite record-breaking dominance in the Africa Cup of Nations finals over the last decade.

"Brazil is two games away. We must keep focus. One game at a time," Bradley said.