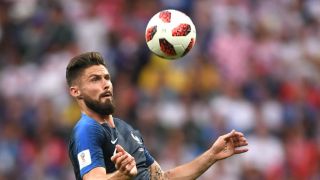 World Cup winner Olivier Giroud has ended his campaign without a single shot on target in 546 minutes of action.

The Chelsea striker played 81 minutes of Les Bleus' thrilling 4-2 final win over Croatia on Sunday where his woes in front of goal continued.

After failing to start France's first game against Australia, Giroud was introduced into the starting XI for the second group clash against Peru – a position he did not relinquish for the remainder of the tournament.

While he failed to pose much in the way of a goal threat, his physical presence allowed Kylian Mbappe and Antoine Griezmann to flourish, the duo causing havoc for defences throughout Russia 2018.