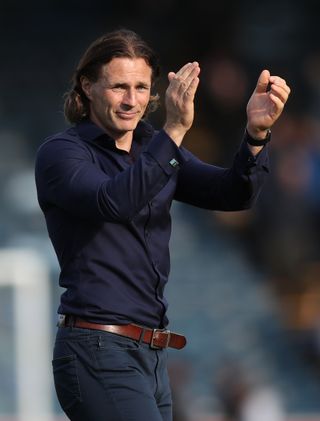 Wycombe boss Gareth Ainsworth believes an inspirational talk from a mountaineer who conquered Everest can help the club scale new heights when they head to Wembley.

The Chairboys go into the Sky Bet League One play-off final against local rivals Oxford bidding to reach the second tier for the first time in their history.

Monday evening’s winner-takes-all clash will be played behind closed doors at the 90,000-seater national stadium because of coronavirus restrictions

Ainsworth has worked hard on mental preparation all season and hopes memories of a pre-lockdown talk from British adventurer Nick Hollis – who has climbed the highest mountain on each of the seven continents – will provide his players with the strength required to secure a remarkable rise into the Championship.

“It’s going to be eerily quiet and the players have got to be ready for this,” Ainsworth said.

“We do plenty of development days and things away from football. We had a mountaineer in and he was talking about the lonely moments when he was up mountains.

“We do these things to try and help the boys for all these situations.

“If we can access into some of that and anchor some of those feelings, I’m sure it will put them in better stead than just the shock of an empty stadium.

“The talk was about the process of getting up there, rather than just aiming for the top, and the boys took it on really well.”

Ainsworth is English football’s longest-serving manager having taken over at Adams Park in September 2012.

The 47-year-old, whose side were among the relegation favourites at the start of the season, saved the club from dropping out of the EFL just six years ago and admits it feels strange to even contemplate reaching the second tier.

He insists Wanderers are underdogs against their near neighbours but believes they can thrive with that status.

“There is nothing to lose at all because nobody expects Wycombe Wanderers to be in the Championship,” he said.

“Even saying those words together sounds a little bit funny, whereas you’d say an Oxford, or a Portsmouth, or a Sunderland, they fit in the Championship.

“Wycombe to do it would be amazing. We have everything to gain and I’m really looking to see how much we can gain.

“Listen, Oxford are a bigger club without a shadow of a doubt, their history goes back in the league a lot longer than us.

“Look at any bookmakers and any pundits and everyone is writing us off, which is fine with us, it gives us strength if anything.”

The unconventional former Preston and QPR midfielder, who is lead singer of a band called The Cold Blooded Hearts, has cultivated a rock star image and may grace the Wembley turf in cowboy boots and a leather jacket.

He hopes talk of his dress sense can ease the pressure on his players.

“As long as it’s not 30 degrees, the leather might come out, you never know,” said Ainsworth.

“I always try and come out with something against the grain and I’ve got a couple of pairs of cowboy boots that you never know might just grace the turf of Wembley. We’ll see.

“It won’t be about me, but if I can distract and take the pressure off the players at all then I’m happy to take a bit of stick for my gear.”