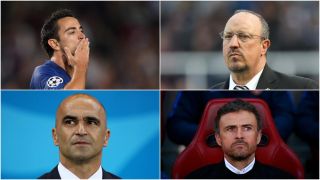 The race for Spain's vacant coaching position is set to intensify after Fernando Hierro's short-term tenure ended with a shock last-16 exit at the World Cup.

The Royal Spanish Football Federation (RFEF) confirmed on Saturday a new full-time appointment will be sought, with Hierro not returning to his sporting director role either.

Julen Lopetegui's sacking on the eve of the World Cup meant Spain were always likely to need a new coach.

Here, we assess six candidates who could step in and pick up the pieces for the 2010 world champions.

If experience is desired, Benitez could well be the man. The 58-year-old former Liverpool and Real Madrid boss has an extensive history in England and Italy along with an enviable list of achievements in his homeland, including two LaLiga titles with Valencia. Admired for his tactical nous, the Champions League winner has never seemed satisfied with the boardroom support he receives at Newcastle United, suggesting an approach may be considered.

Belgium's appointment of Martinez is beginning to look like a masterstroke. His stock plummeted with an underwhelming stint at Everton that culminated in his sacking in May 2016, but a swift transition to the international arena has turned from bewildering to brilliant at the World Cup. With a quarter-final victory over Brazil now on his resume, Martinez could leapfrog the queue by leading the Red Devils to glory.

Flores immediately emerged as one of the leading contenders following Lopetegui's removal. His reputation in the eyes of the RFEF appears uncoloured by an underwhelming stint in charge of Espanyol, who dismissed him in April. Indeed, the fact that the ex-Valencia and Watford boss is a free agent could enhance his prospects. Guiding Atletico Madrid to the Europa League title in 2010 remains his greatest achievement.

Another who would not need to be released from a contract, Luis Enrique has yet to find a new home more than 12 months after calling time on a successful three seasons at Barcelona. Though he won nine trophies at Camp Nou, the 48-year-old's often tense relationship with the Barca board – and Lionel Messi – may be counted against him by an organisation eager to smooth over recent instability. Luis Enrique, though, is the biggest name among the likely contenders.

Capped 66 times by Spain during a long career with Real Madrid, Michel appears a safe pair of hands and reportedly has the backing of the players. His past two coaching appointments, at Marseille and Malaga, ended in failure, although a hat-trick of titles with Olympiacos adds some lustre to the CV. He knows what the national team set-up is about and should have the fans onside courtesy of his seven-year playing service with La Roja.

Could he be convinced to end his playing career in Qatar and return to the spotlight? Xavi, still active for Al Sadd at the age of 38, has been mentioned as a surprise contender to take the helm of the team with which he won the 2010 World Cup. The famously cerebral midfielder has expressed a desire to move into coaching and, if he is backed to unite an occasionally fractious dressing room, could find a shortcut to a future job at his beloved Barca.